Through compassionate giving and service, The Sogan Foundation aspires to bring hope and opportunity to those most in need.

The Sogan Foundation (TSF) is a humanitarian non-profit foundation which was founded in 2004 in the Bay Area of Northern California by Venerable Sogan Rinpoche with the support of his students and friends in the local community and around the world.

TSF's projects are concerned with addressing the roots of poverty and the harms that so often attend it, including poor health, lack of education, degradation of the natural environment and a community sense of isolation and disempowerment.

Our sister organization's Center, Tupten Osel Ling (TOL), is situated in Manzano de Mori, Trento, Italy.  Ukrainian refugees are making their way into their area and the Chief of Ministry of Mori asked TOL if they would help care for them offering food, shelter, and basic necessities.  Many donors in the US understood the urgency of the situation and responded with gifts the same night or the next day.  Because of their kindness, our US organizations, Tupten Osel Choling and The Sogan Foundation were able to wire $11,212 to TOL.  The Sogan Foundation plans to continue gathering donations and hopes to wire another generous donation to TOL in the near future.  TOL and the Chief Minister of Mori have expressed deep gratitude for our donations and for opening our hearts to help fellow humans suffering extreme difficulties.

To provide aid to those Tibetans in exile who are most in need, particularly those affected by COVID-19, The Sogan Foundation donated $1,350 to the Golok Families Relief Funds.

The Sogan Foundation donated $1000 to PM Cares which is a program created to support relief efforts in India to aid in the treatment and containment of the Coronavirus pandemic in India.

November 2018: Helping Those Affected by the Camp Fire

To assist with the relief efforts in California following the Camp Fire, TSF donated $1,000 to "Caring Choices" based in Chico, CA (for more information click HERE).  The Camp Fire was one of the deadliest and most destructive wildfires in California history.  It destroyed over 18,000 structures and killed more than 80 people.  The town of Paradise, CA was largely destroyed within the first day of the fire, losing an estimated 90% of its buildings.  With the terrible toll of those affected by this tragedy, we felt the urgent need to contribute  to the relief efforts focused on providing aid to the survivors in Paradise, CA.

To assist with the relief efforts in Puerto Rico following Hurricane Maria, TSF donated $1,000 to the "One America Appeal" campaign of the George Bush Presidential Library Foundation.  Hurricane Maria was the strongest storm to strike Puerto Rico in more than 80 years, and it reduced homes to heaps of splintered wood and crumbling concrete, turned streets into rivers of churning brown water and left the island without power.  With the scarcity of food, clean water, shelter, gas and medical supplies, we felt the urgent need to contribute to the relief efforts in Puerto Rico.

September, 2017: Helping Those in Exile

In order to assist those from the Golok region of Tibet currently in exile, TSF donated $1,604 to the Golok Trust Fund based in Mcleod Ganj, India.  The Golok Trust Fund aims to support the people of the Golok region of Tibet who are in exile by contributing towards their greater economic self-sufficiency, increased educational opportunity, improved public health, providing medical and humanitarian assistance, and helping to protect and preserve the natural environment. 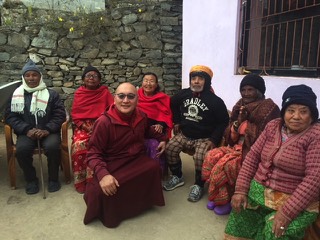 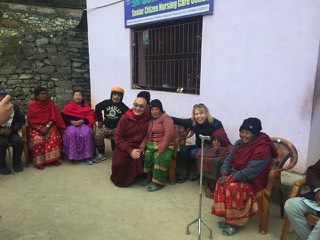 In January 2017, Sogan Rinpoche visited the Senior Citizen Center in Pharping, Nepal and spoke with the residents there.

June 2016: Helping those Affected by Tragedy in Orlando, Florida

In response to the shocking events of June 12, 2016, TSF joined contributors from around the world and pledged $200 to support victims of Pulse shooting, a fundraising effort on behalf of those directly affected.  100% of all funds received will be distributed to victims' families, survivors, and those in the club who may not have suffered physical injury but are in need of trauma support.

On April 25, 2015 the Country of Nepal experienced a devastating 7.9 magnitude earthquake.  Aftershocks reached 7.4 magnitude and continue up to the present.  In response to this tragedy, The Sogan Foundation partnered with a local Nepali NGO, Earthgarden Nepal, to provide immediate relief supplies of food and shelter materials to affected communities in several districts of the country.  As the critical phase passed, The Sogan Foundation then committed to working with Earthgarden Nepal and the village community of Pharping, on the southern outskirts of the Kathmandu Valley, to construct a community hall and earthquake shelter.  Fundraising through private donations, online crowd-sourcing, and local contributions successfully gathered the following amounts:

Construction began on the project in the spring of 2016 and was completed in July, 2017.  The site chosen for the shelter was on land offered by the Dakshinkali Municipality, adjacent to the town' Senior Citizen Nursing Care Center.  Thus the shelter serves several functions.  It is a safe, central meeting point in the case of future disasters.  It is a space for important community meetings and can be used by other local groups for events.  Finally, it is a resource for the senior citizens who live beside it, allowing them a clean and spacious place for yoga and exercise programs.  The shelter will be managed by the administration of the Senior Citizen Center and revenue from programs there will contribute to supporting the senior residents.

We extend our sincere thanks and gratitude to each and every single one of you for your support, which undoubtedly helped ease the acute suffering of many individuals.

In the wake of Nepal's two major quakes on April 25th and May 12th, the first priority was to ensure temporary shelters for the thousands whose homes were rendered unlivable.  We focused on providing shelter materials (tarps and tin roofing) and food to approximately 533 households.  Many recognized that these kinds of grassroot level efforts to bring supplies directly into the hands of those affected by the crisis were the most effective and fruitful relief work that occurred.

With gratitude and thanks from Nepal, 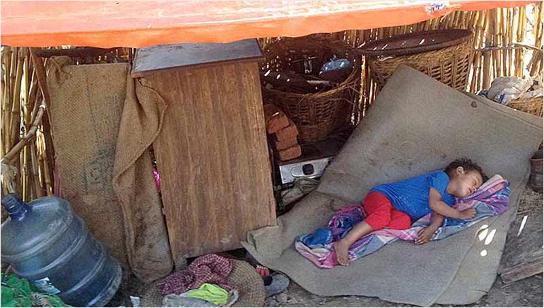 A child in the Kathmandu Valley sleeps under a TSF-funded tarp in a makeshift shelter.  To find out more about the post earthquake situation in Nepal and to see more photos, click HERE 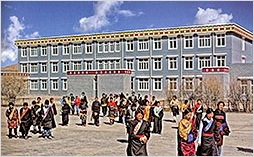 A new school for native Tibetan teenagers who need a modern education to sustain hope for a brighter future for themselves and their communities.

In 2004, in partnership with local officials and community leaders, The Sogan Foundation (TSF) began work on establishing the Tibetan Institute for Science and Technology (now called Kunsel Kyetsal) in response to a critical lack of educational opportunities  for Tibetan teenagers in Golok.  At that time there was only one Tibetan high school for all of Golok's 135,000 inhabitants, and it was poorly furnished and in dilapidated condition.

Local leaders envisioned a spacious new building - with fully equipped, modern classrooms - where secondary school students could receive training in the sciences and information technologies in their native Tibetan language.  They approached Golok native Sogan Rinpoche with their plan and in response Rinpoche started The Sogan Foundation in 2004.

Kunsel Kyetsal, the science and technology school facility in Golok was TSF's first project.  The building was completed in 2007 and since then has welcomed a new class of students every fall.  To learn more about Kunsel Kyetsal and see photos of construction, the festive inauguration in 2007 and its hardworking students and teachers, click HERE 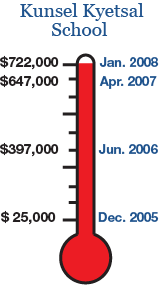 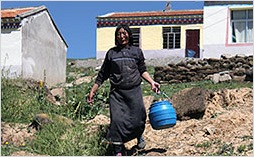 Clean, accessible drinking water for Tibetans living in a new settlement for retired nomads near the monastery on Bayan Mountain.

In keeping with a centuries-old tradition of caring for elderly nomads in Golok.  In 2007, a small settlement for older Tibetan men and women was established near Bayan Monastery.  In 2008, The Sogan Foundation agreed to fund construction of a simple water system for the fledging Bayan senior community.

Before the new water system was installed, residents had to fill buckets with water from an unprotected spring some distance away, and haul it back along narrow dirt paths to their homes.  The hike was difficult even in summer and in the icy Tibetan winters it could be treacherous.

Within a few years several dozen simple homes had been constructed.  Here, elderly Tibetans can leave behind the rigorous nomadic way of life and settle for the remainder of their days with the companionship of life-long friends and family and caring monks nearby to offer support.

To find out more about the Bayan senior community and how support from TSF had made their lives safer and healthier, click HERE. 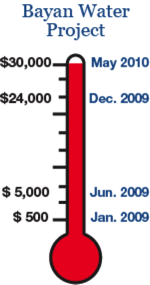 The Sogan Foundation Supports Initiatives from Other Humanitarian Organizations

In March, 2012 TSF gave $1,000 to the Sarnath International Nyingma Institute in support of its mission to serve as a bridge of goodness between East and West.  The Institute, which was officially inaugurated in December, 2013, is located in Sarnath, India - a sacred Buddhist pilgrimage site - and its academic focus is on the study of Buddhist languages: Pali, Sanskrit, Tibetan, and English.

On December 24, 2013, we contributed $1,000 to the Dalai Lama Institute for Higher Education, the first Tibetan college for the exiled Tibetan community in India.  Its prime mission is to inspire Tibetan students to study the Tibetan language and culture as they continue to pursue further studies.  The college which is located near the city of Bangalore offers a broad curriculum including science, arts, counseling as well as computer and information technology.

Pictured below: The Dalai Lama Institute for Higher Education 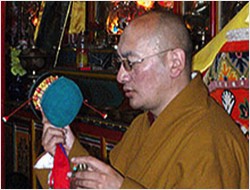 For more about Ven. Sogan Rinpoche and his Buddhist teachings, see the website of the California Dharma group, Tupten Osel Choling