While science and technology alone will not bring happiness to the mind or peace to the world, without them we Tibetans cannot succeed in the modern world.  Sogan Rinpoche, July 29, 2007 (from the speech at the inauguration of Kunsel Kyetsal  in Golok, Tibet). 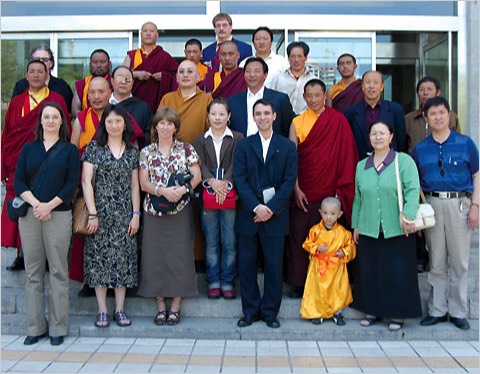 In July 2007, Sogan Rinpoche, other TSF board members and volunteers traveled to Xining, the capital of Qinghai Province en route to Golok.  With us in this photo are education officials, monks from Bayan Monastery, Rinpoche's family members and the project management team. 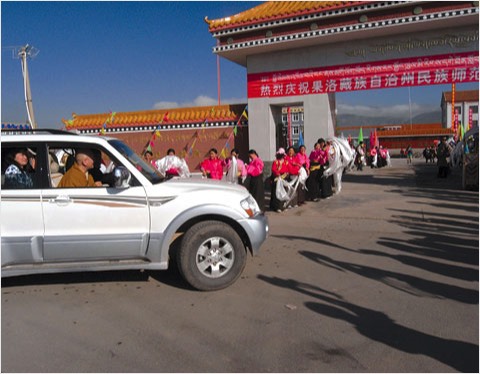 Sogan Rinpoche's car led our caravan through a sea of waving katags (white silk scarves signifying friendship, purity, goodwill, and harmony) to the school where the new Kunsel Kyetsal building stood gleaming in the sun. 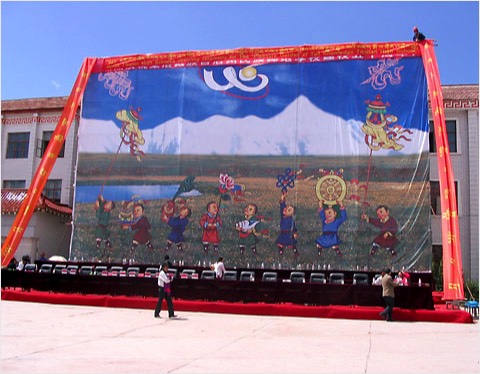 The inauguration of Kunsel Kyetsal dovetailed with the 50-year anniversary of the school's campus.  The campus had been the site of a teachers academy until 2003, when it was converted to Golok's first Tibetan high school. 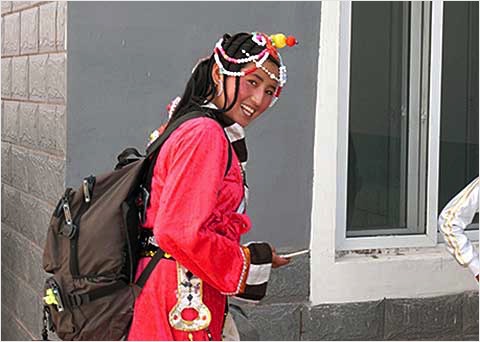 The students performed highly choreographed dances throughout the day's celebration.  This student is wearing a dance costume and headdress inspired by traditional ceremonial garb. 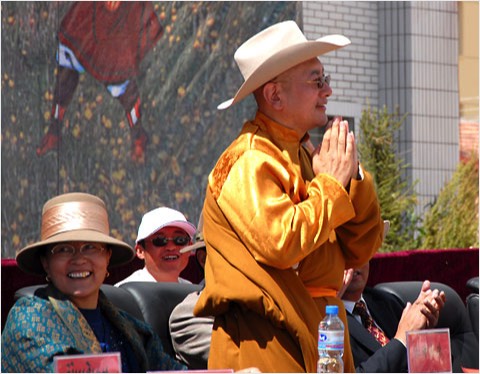 Sogan Rinpoche greeted the crowd before presenting his speech in both English and Tibetan.  Students, their families, and many others from the local community attended the celebrations. 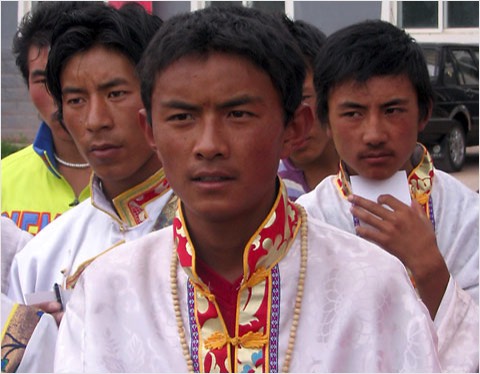 These boys, still dressed in their dance costumes, are waiting for the opportunity to speak with Sogan Rinpoche. 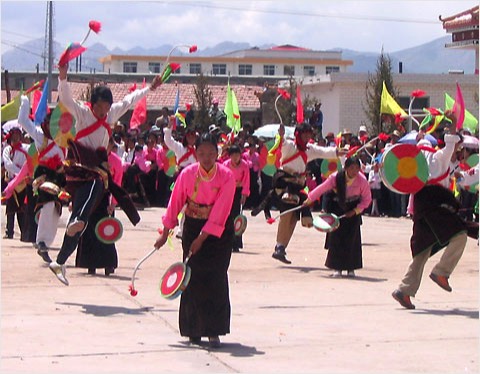 The day was filled with joyous dances, involving theatrical twirls and jumps, drumming, and dramatic presentations. 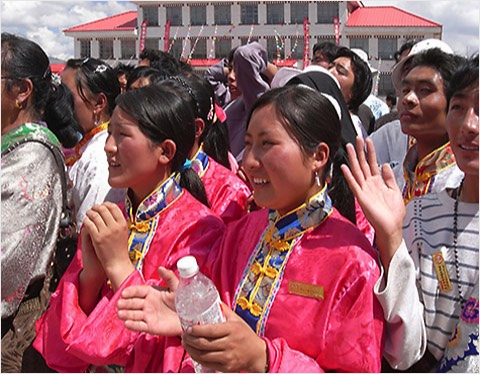 Inauguration attendees endured a long day in bright hot sun.  Energetic dancing and singing were followed by speeches from government officials and educators, who praised the school and urged students to study hard and work to benefit their community. 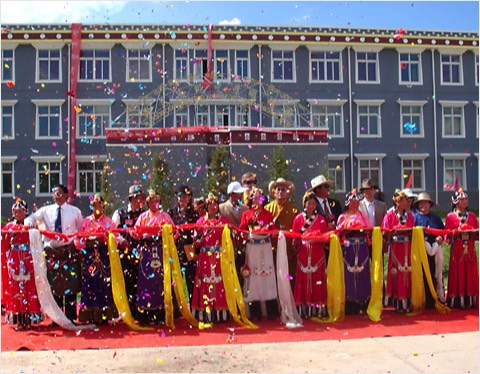 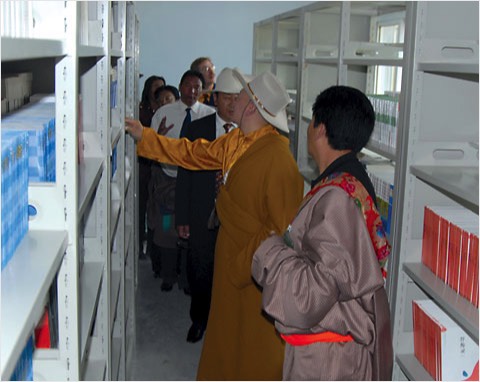 After the ceremonies, we were given a tour of the new building's interior.  The shelves of the two libraries - one for titles in Chinese and the other for titles in Tibetan - were only partially filled.  Before long, the libraries were completely funded and fully stocked with books. 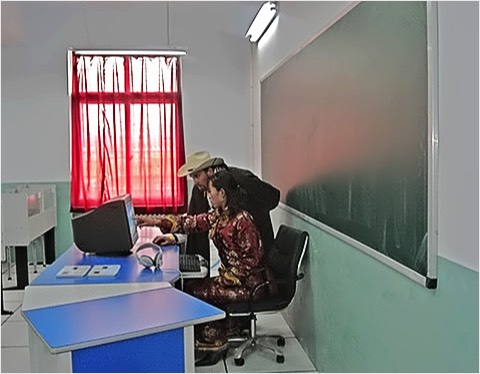 Yemchen Tsomo, an English instructor,  explains the new language laboratory technology to a friend.  Kunsel Kyetsal students use the labs to study English and Chinese.  The school's primary language of instruction is Tibetan.

This photo is taken from the front of the large multi-function lecture hall.  Previously, except for the dining hall, the school had no space for large assemblies. 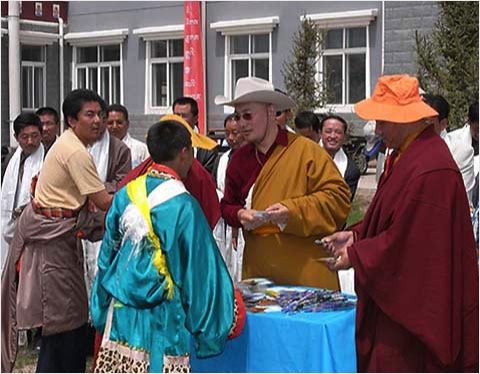 Sogan Rinpoche met each student and gave them pens donated by friends of the organization in the US. 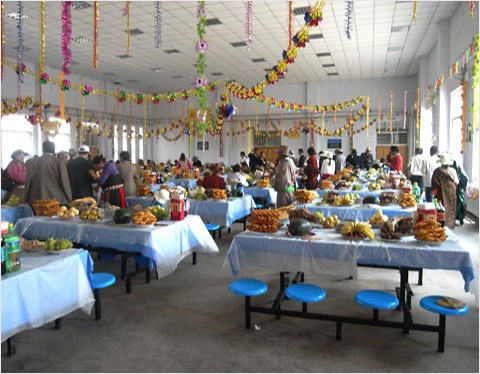 Extravagant feasts began on our arrival in Xining and continued for the remainder of the trip.  During inauguration, the dining hall was decked out with ornaments and streamers, and tables were laden with traditional foods including mutton and yak meat, and fried snacks called kopse. 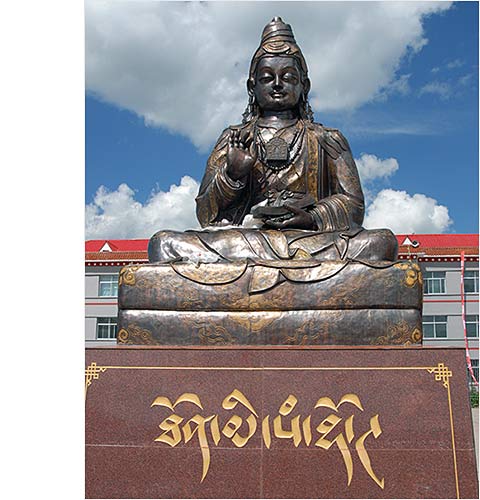 This statue, which stands in the central area of the school's courtyard, portrays Tonmi Sambhota, a minister who served under king Songsten Gampo (617-649 AD), the Tibetan king who introduced Buddhism to the region.  The population in general did not embrace Buddhism until later on.  Tonmi Sambhota, revered as a brilliant figure in Tibetan history, is credited with devising the first alphabet for the Tibetan language, which had previously existed only as a spoken tongue.  He also developed the first rules of grammar for Tibetan.

Kunsel Kyetsal - Inaugural II, more from TSF's visit to Tibet in the summer of 2007

About Golok Part I

Back to Photo Galleries