About Golok, Tibet Part I

Golok is the highest area in Tibet and China, with most of it lying above 13,000 feet in elevation.  It is a beautiful, remote region resting on a high plateau in Qinghai Province, China.  The population of about 140,000 is dispersed across 75,000 square kilometers, an area roughly the size of Austria.  These photos were taken by TSF board members and friends during journeys to Golok in 2005 and 2007. 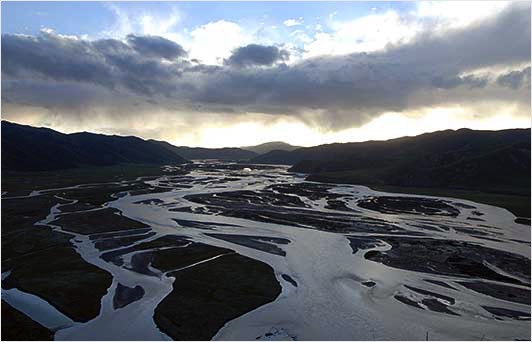 The Yellow River flows throughout Golok creating dramatic canyons and pastoral floodplains.  It is the seventh longest river in the world, flowing from the Amnyemachen mountain range to Bonhai Bay in N.E. China - a total of 3,398 miles.

Two nomad women are sitting outside their handwoven yak-hair tent.  The inside of a nomadic tent is very basic - usually including a stove, a few extra clothes, a little food, blankets and sleeping mats.  Because nomads move so often, their possessions must be easy to pack. 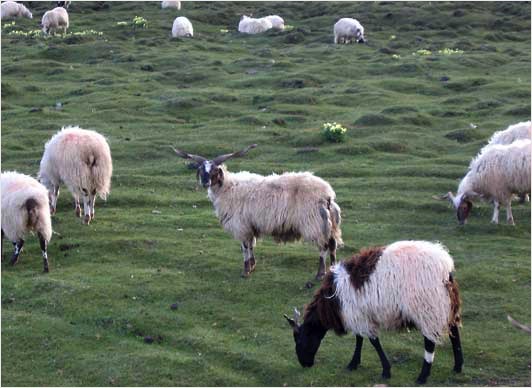 Sheep are an essential resource  for the nomads of Tibet.  Tibetan sheep's' wool is renowned for being one of the best carpet wools in the world.  However with the passing of every year the size of herds is diminishing, and today a herd  of 100 sheep is rarely seen. 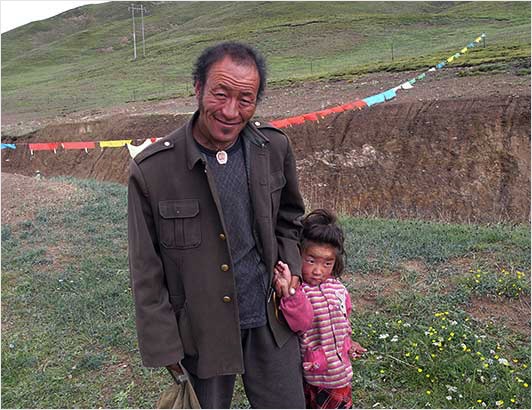 Driving  up to Dawu, the capital of Golok, we encountered this gentleman and his daughter walking through the fields in the middle of seemingly nowhere!  We stopped to exchange greetings as is customary in the region. 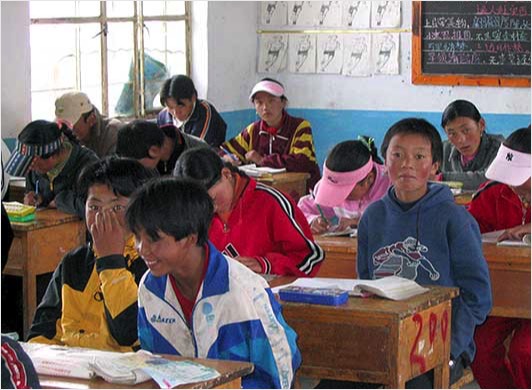 Traditionally, local monasteries were the main source of education for nearby communities.  In recent years, schools have been built to provide education to those children who can be spared from the daily chores and demands of nomadic life. 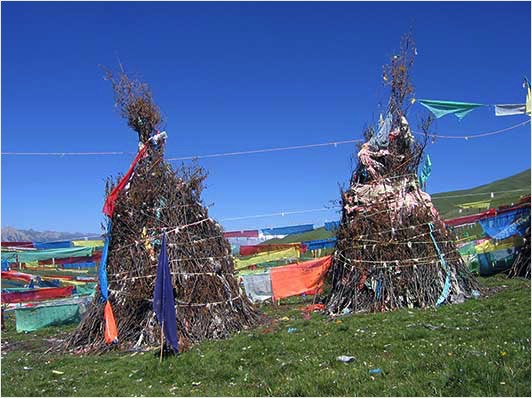 An integral part of the daily life of the people of this region is making offerings representing their wish for the happiness of all beings.  These stupas (mound-like monuments found in various forms in all Buddhist countries) are made of twigs, string, and prayer flags. 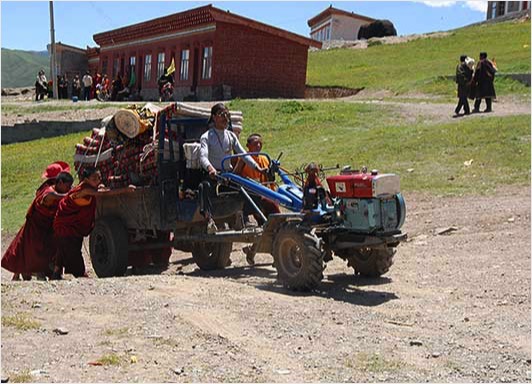 A local merchant delivering sleeping mats to the monastery get some helping hands up the steep hill from young monks.  Members of the community in Tibet contribute whatever they can to support the monasteries. 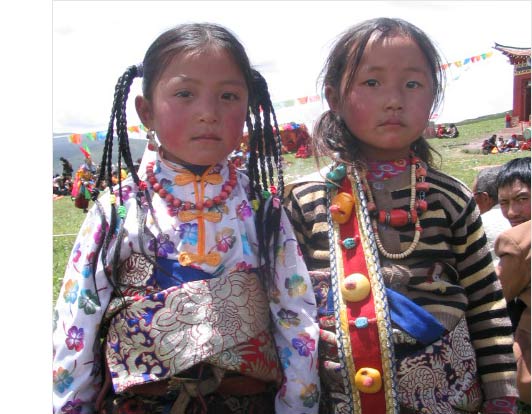 These young girls, adorned in their finest outfits, attend the annual king Gesar epic which is performed by monks at the local monastery.  Tibetans come from far and wide to enjoy a festive time filled with spiritual stories, socializing and picnicking. 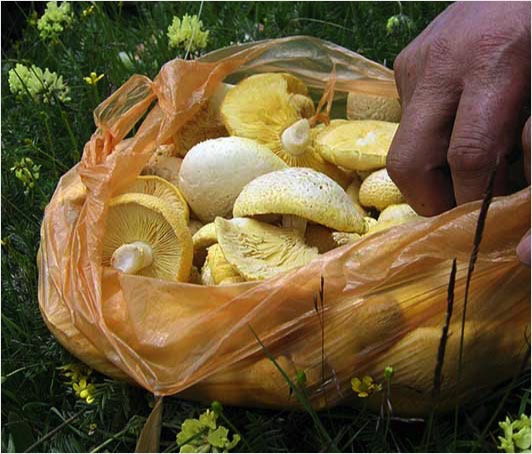 We flew from Beijing to Xining, then on to Dawu by car - an eight-hour trip when road conditions are good.  As we picnicked  by the side of the road during a rest stop, we met a young nomadic woman who was eager to sell us these mushrooms  she had foraged. 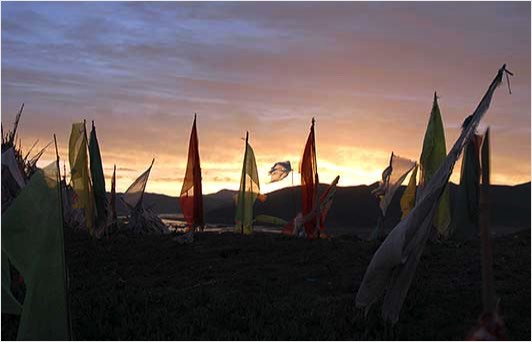 These prayer flags are fluttering at the top of Bayan Mountain while the sun is sinking behind the mountains in the west.  Climbing up to the top of this 14,700 feet sacred mountain, we stopped frequently to gulp the thin air into our oxygen-deprived lungs. 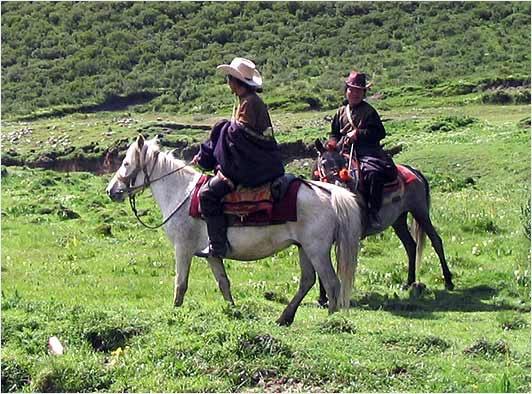 The nomadic people of Golok are masterful equestrians and skilled herders.  Their sturdy tents, compact saddle gear and warm, flexible clothing typify a culture closely tied to the earth.  The horses they ride are small in stature, feisty in nature and fleet of foot. 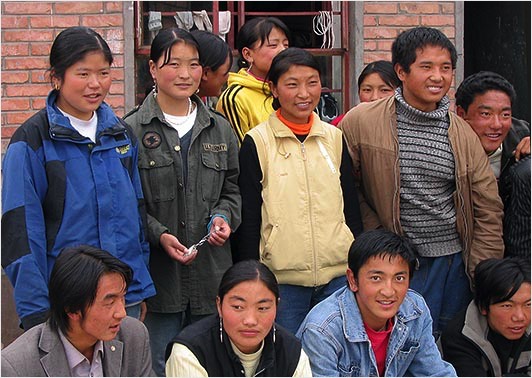 These lively teenagers are students at the Capital City High School, site of our Kunsel Kyetsal project.  Bright and enthusiastic, they see new hope and possibilities for the future, thanks to the educational opportunities provided by Kunsel Kyetsal. 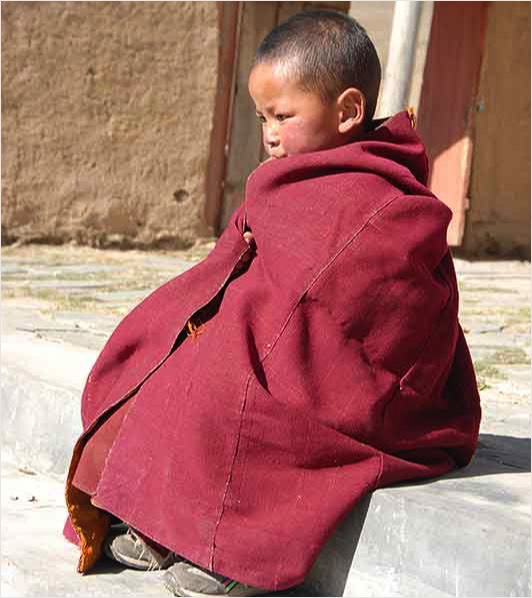 This young Golok boy appears to be engaged in deep reflection.  Wearing monk's robes, he is perhaps mulling over his daily lesson, thinking about the meaning of a prayer, or wondering what will be served for lunch. 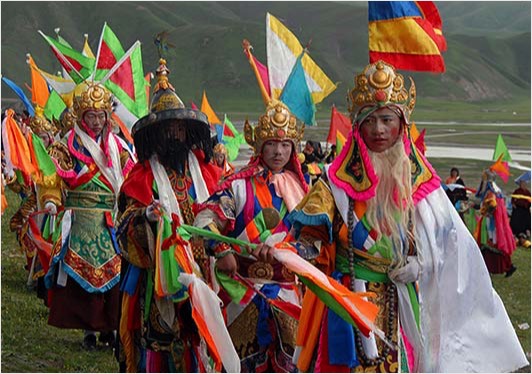 Monks dress in elaborate costumes to perform the colorful epic of King Gesar.  During this annual one to three-day festival, they recall the start of Tibet's rich spiritual tradition, when barbaric and evil influences were dispelled by the great master, Padmasambhava. 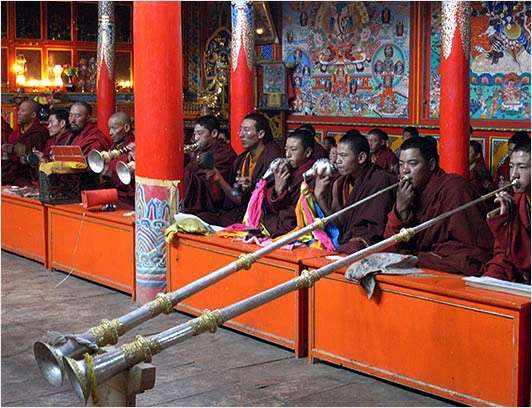 Bayan monks are playing horns, cymbals, conch shells, bells and drums at a ritual tsok ceremony. The combination of sounds in conjunction with the powerful wish to be of benefit to all living beings is believed to have a healing, purifying effect on the environment.

Kunsel Kyetsal - Inaugural II, more from TSF's visit to Tibet in the summer of 2007

Back to Photo Galleries